Why The Author Incubator Bought* A Bank 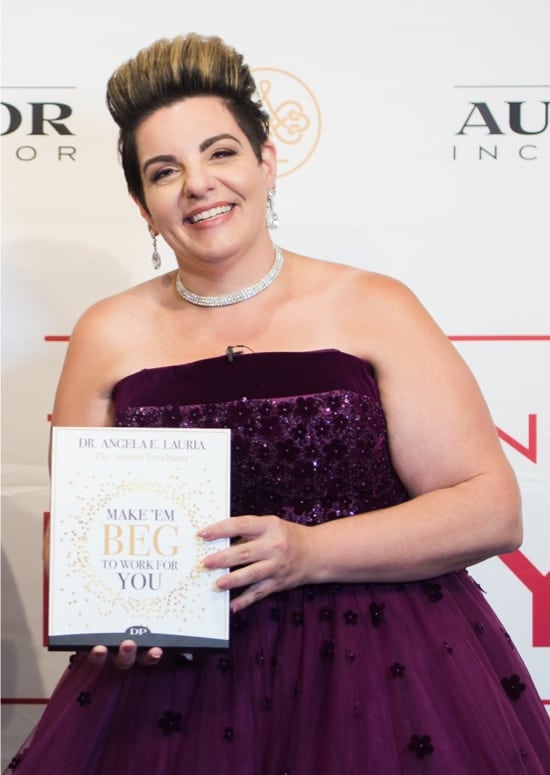 For the past few months, we’ve been focusing a lot on the concept of transformation around here. Last month we hosted a series called The Transformational Author Summit, which included authors from every stage in the process of transformative authorship, including Oprah’s ex-producer, Sheri Salata. And Sheri’s book launch seemed like a pretty great excuse to celebrate our own transformation as a company by inviting the greater Georgetown, D.C. area to an open house at our brand new office location!

It was an EVENT. We broadcast Angela interviewing her new friend Sheri to thousands of people. Champagne, hors d’oevres, and a giant wall of roses may have been involved- not to mention a certain degree of merriment. And to finish a week of transformational launches, Sheri indulged us by signing and distributing several hundred copies of her book (which, by the way, is about her transformation out of a twenty-year career with Oprah). It was the perfect way to cut the ribbon on our very first “office building.”

But what’s kind of interesting is that the addition of our new location on the Potomac riverfront in itself represents a pretty major transformation for us as a company- on just about every level. We started adding staff into this new building a year ago this month, but the journey from then to now illustrates the risk (and also the reward) that comes with service-centered entrepreneur-ing.

See, pretty much anyone in the entrepreneurial space is more or less flying around by the seat of their pants- pivoting constantly, growing quickly, and rolling with the changes. In fact, we’re fond of the expression “building the plane while you’re flying it.” And while unfortunately we can’t take credit for that one, one of The Author Incubator’s three core principles, coined by Dr. Angela Lauria, is going to be just as absolutely crucial for any entrepreneur to understand:

Discomfort is necessary for growth.

Our Georgetown location, now called The Author Training Academy, embodies that principle just about as well as any building possibly could- and that’s because it was a huge, but necessary, risk to everyone involved.

You might imagine that a company ranked in Inc. 500’s Fastest Growing Private Companies in America (we’re #275, to be exact) might need to scuttle to a bigger shell every once in a while, but it took less than two years to determine that a literal CASTLE wasn’t going to be big enough to take us where we needed to go. And we had a very good run in The Author Castle- it was the right place for the right amount of time, and it gave us and our authors a powerful, stimulating, and collaborative environment in which to grow and serve. But it was clear to Dr. Angela that in order to continue serving better and stronger year after year as we had been, it was time for a complete transformation of what it meant to serve as The Author Incubator.

The easier route would have clearly been to continue doing what we were currently doing without scaling up. The Author Castle is familiar, comfortable, and we could still do more good there than most companies achieve in a Google-sized facility. So yes, we could’ve rested on our laurels and continued to help a maximum of 20-ish people per month write books that make a difference in the world.

But of course, that’s not what happened. Angela realized we were fast approaching a ceiling with regards to how many people we could serve. Adding the Georgetown location would allow us to double that number. But our expansion also represented new possibilities and an updated vision. We recently issued a formal request with the Accrediting Commission of Career Schools and Colleges, with the ultimate goal being tuition assistance. Making our program more accessible, both fiscally and in terms of sheer numbers, means we can continue serving exponentially— and that’s really the kind of transformation that we’re interested in; the kind that defines The Author Incubator and our mission to amplify the voices of healers and magic-makers by helping them write, publish, and promote their non-fiction books.

Of course, just because transformation is necessary doesn’t make it easy. After all, in our case, the Georgetown location now known as The Author Training Academy was a United Bank immediately before.

And repainting every wall was by no means the greatest concern. Achieving Angela’s vision required construction, destruction, and installation on a huge scale- not to mention at least five separate teams of contractors. And of course, we didn’t stop everything we were doing and wait until it was done; construction on a million-plus-dollar project happened all around us for the better part of a year, giving new, literal meaning to that adage “building the plane while you’re flying it.”

Can you imagine if for six months we turned away the thousands of applications to work with us with an automated message saying “Under Construction – we’ll resume making the better place in 6 months.” Never mind that 6 months apparently means a year or more to a contractor’s ears- if someone comes to your door covered in blood after a car accident you don’t turn them away because you’re getting your kitchen remodeled.

So with that in mind one could assume that discomfort was happening- both in the sense that the first office we’ve had as a company was changing under our feet every single day, but also because it represented our most massive business expense to date.

… But consider the growth that occurred as a result of that discomfort.

The Author Training Academy is now likely unrecognizable to anyone who ever knew it as United Bank. The lime green has been replaced with understated burgundy; pictures of clients cover every wall; most employees have crystals and diffusers and mood lighting in their offices replacing the cookie-cutter cubes of yesteryear; crystals flank every elevator and entrance; staff and visiting clients bustle around with excitement and zeal; and the first floor, where our clients spend most of their time, is pure magic. It’s honestly Hogwarts- complete with moving pictures, floating books, wall sconces, a ceiling of books, massive amethyst and citrine geodes, a café, a Zen Room with zero-gravity massage chairs and a salt wall, and, finally, a state-of-the-art Lecture Hall equipped with ceiling-mounted cameras and a cutting-edge streaming suite. 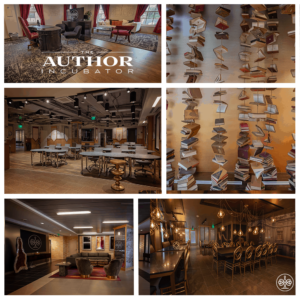 And more importantly, getting the majority of our employees under the same roof five days a week has had an unexpectedly marked impact on the manner and efficiency with which we serve our clients. Besides a “skeleton crew” at the Author Castle, all of us worked remotely until now. Even so we were a miraculous team- but to have almost everyone in the company physically together gelled things even more.

So the moral of the story is that yes, transformation is often just as terrifying for us as it is for you— just because we’re doing it on this scale doesn’t mean we need to be less brave than someone, say, starting their first business or committing to get their book done. At this point we’ve just gotten really good at recognizing that becoming a transformational entity often requires that we shut down the “lizard brain” thoughts and excuses that keep us from chasing the dreams that allow us to make a difference in this world.

Of course, recognizing when to up-level your business at that kind of scale is not quite as important to the service-minded entrepreneur as recognizing how to execute your vision. A growing movement needs a foundation under it, and building the team that makes this kind of growth possible isn’t nearly as easy as it looks from the outside. It was the most challenging element of Angela’s journey with The Author Incubator— and last week she released a book about that experience.

Make ‘Em Beg To Work With You: 7 Steps to Find, Hire, Manage, Reward, and Release All-star Players to Help Make Your Dream a Reality combines many of the hardest-earned lessons that Angela has learned in the five years since she started helping her clients get their books out into the world. Naturally, it includes the sort of fascinating stories we’ve all come to expect from Dr. Angela. But more importantly, it describes what it took to get from $0 to $20M a year in 5 years as well as why that process looks completely different now than it might have even 10 years ago.

She describes this as her best and most important book to date— largely because many of the obstacles that impeded her can be avoided with some foresight. And while it’s a difficult journey even with a guide, Angela would prefer to save you the time it took her to approach every obstacle from every angle before landing on the one that finally clicked. So in the interest of helping burgeoning entrepreneurs get to a point where they can create their own massive transformations, we’re making her e-book available to download for FREE.

We want to help make your transformation mean something— and that means avoiding burnout when things get tough. So whether you’re just starting out, or scouting for your first employee, or expanding to a second location, we hope you’ll appreciate Make ‘Em Beg To Work For You as the love letter Angela intends!

Love, Light, and Letters from all the Muses,